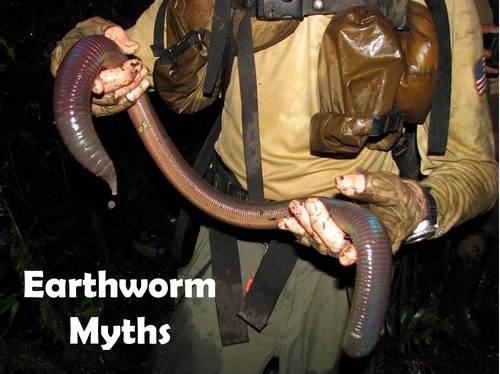 Gardeners talk about earthworms as if they are all one species but there are over 3,000 earthworms on earth. Some burrow, some small, some jump or at least we call them jumping worms. There are also stories of giant three foot worms, but do they really exist?

We think they are good for our garden because they build better soil but the same earthworms are also very destructive to natural places.

And then there is the age old story about cutting worms in half to get two worms – is that true?

Earthworms are terrestrial invertebrates that occur worldwide where soil, water and temperatures allow. Wikipedia describes them as having a tube-within-a-tube body plan, which is quite descriptive. On the outside we see a long tube and on the inside they have another tube that connects their mouth to the digestive system that ends at the anus. Unless you are a worm, it can be difficult to tell one end from another.

They eat organic matter, but their true food are the many microbes that live on this organic matter. They breathe through their skin which is why they have to keep constantly wet, or they suffocate. They have a circulatory system, a nervous system, are able to sense light and move along using muscle contractions. But the coolest thing about them is that they are hermaphrodites – they have both sex organs but can’t mate with themselves. They wait for a cool moonlit night to hook up and exchange sperm in a kind of wormy 69.

Does Cutting a Worm in Half Produce Two Worms?

You might remember this claim from your youth however it is unlikely to happen and most authorities say it can’t happen. But according to some research it is theoretically possible with specific species.

In any event, they can regrow a severed tall or a severed head. The ability to do this depends on the species and the location of the amputation.

There is a planarian flatworm that is very good at regenerating its body, but it is not an earthworm. This worm is commonly studied in school and slivers as small as 1/300th of the animal’s original body size can regrow into a full animal.

Some earthworms automatically drop their tail when threatened, a process called autotomy. This is similar to the process used by some retiles who are also able to regrow their tails. Some predatory ants have learned the best place to bite these earthworms to encourage this behavior. It is much easier carrying a small piece of tail to the nest rather than the whole worm. Autotomy is also practiced by jumping worms. 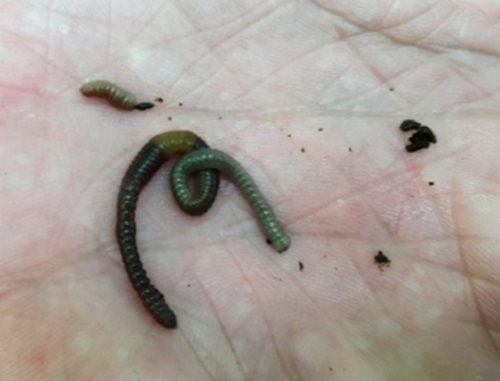 Earthworms Are Not Native to North America

This one will surprise a lot of you. Earthworms did live in North America at one time, but they became almost extinct during the last ice age. A few species did survive in areas that were not blanked in ice, including the southern US and the west coast of British Columbia. Most of the earthworms you see today in North America, including the familiar red worm Lumbricus rubellus, are decedents of worms brought from Europe.

Is it Eisenia fetida or Eisenia foetia?

Eisenia fetida is a common earthworm known as manure worm, redworm, trout worm, tiger worm, and red wiggler. Earthworm taxonomists changed the spelling from ‘fetida’ to ‘foetida’ for awhile, but then changed it back to ‘fetida’. That is why you see both spellings.

These guys are native to Europe but are now found on every continent except Antarctica.

Many species do make burrows to various depths, but they don’t all do this. Eisenia fetida live in the top few inches of soil and spend most of their time in the leaf litter above soil. This makes them very popular for vermicomposting which uses shallow trays.

The jumping earthworm also lives on the soil surface or just below it.

Are Earthworms Good For Soil?

Prior to work done by Darwin, gardeners considered earthworms a pest and tried to get rid of them. Darwin introduced the idea that they have some benefits for improving soil and now most gardeners believe they are good for the garden. Earthworms do dig tunnels that loosen soil and provide channels for root growth. They move soil containing minerals from lower levels to upper levels. They eat organic matter and help fertilize the soil. These are great benefits for our garden but not for wild environments.

There is now growing evidence that even the common earthworms are destructive to a native forest and prairie environment and result in a decline of species diversity. They consume organic matter faster than these environments can sustain. As a result forests are slowing losing organic matter, which reduces the nutrient level in soil and leads to poor plant growth. Even the trees in the forest are affected and grow less vigorously.

They also reduce the thickness of the leaf litter on the forest floor which is a great protective habitat for all kinds of insects and small animals. Even some birds spend a good part of their time hiding in it. As leaf litter is lost, these animals leave the area.

This newer invasive species, also called Asian crazy worm or Alabama jumper, does more damage to forests and the organic matter laying on the ground than the common earthworm. Many gardeners are not even aware of its existence but it is starting to make inroads here in southern Ontario, it is found in 15 US states and is now found in many parts of the world. I see lots of myths about this worm.

“The jumping worms destroy soil” – Not really. They speed up the decomposition of organic matter, thereby reducing the amount in soil. In large numbers their activity changes the structure of the topsoil making it look more like coffee grounds. The mineral components are still there. They change the soil, they don’t destroy it.

“Nothing will eat them”. Not true. Moles, centipedes, crayfish, salamanders, and other arthropods will eat them. In their native localities they are eaten by birds and it is expected our native birds will also learn to eat them. 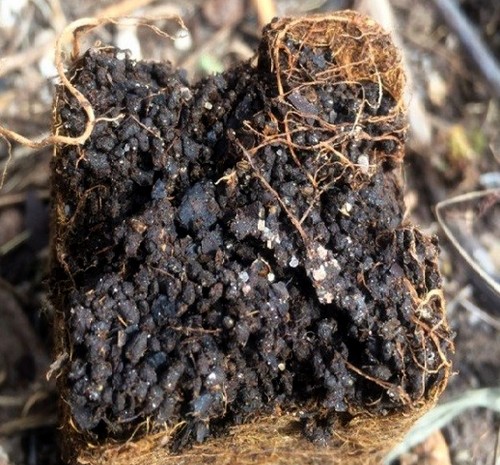 “The worm casts (poop) renders the soil useless – nothing will grow there”. Not really true. The structure can be changed, but most of the castings are left on top of the soil where they are easily washed away. An expert who researches this worm tells me they don’t think they would be much different from regular castings on a chemical and biological basis – they have not been studied yet. One of the concerns is that the change in soil makes it easier for invasive weeds to grow – clearly the soil is not useless but it may be less inviting for native species.

Jumping worms do not need a mate to reproduce and a single one can start a whole new population. They have an annual life cycle in cold climates and survive the winter as eggs protected by a cocoon. These cocoons are small, hard to detect, and can be spread easily in potted plants, on landscaping equipment, mulch, tire treads, and even hiking boots. Baby worms hatch in spring.

Jumping earthworms are very much like other epigeic earthworms which live on the top layer of soil. The difference is that the jumping earthworm, grows faster, eats more, makes more castings and lives in larger populations. The big concern with them is not so much what they do, but how quickly they do it.

Despite being called jumping worms they don’t really jump and only a few species actually flail around when disturbed. Other types of worms can also show this behavior so the jumping characteristic is not the best way to identify these worms.

Why Earthworms Come To The Surface During A Rain

Go outside during a heavy rain and you will see earthworms crawling all over the place. The common explanation for this is that they come to the surface so they don’t drown as water fills their burrows, but that is not entirely correct.

Earthworms breath through their skin which needs to be wet all of the time. They don’t have lungs so they can’t drown like humans. Testing has shown that they can survive being submerged in water for two weeks or more.

Different species have different oxygen demands and those with higher demands are more likely to surface in a rain. Those with lower demands tend to stay underground.

Another interesting point is that it is mostly the adults that surface. If the cause were water filled holes, or other suggestions like the sound of rain drops, then a cross section of the population should emerge. The numbers might seem large to us, but in actual fact the majority of any population stays underground. Counting earthworms in a rain won’t tell you how many you have in your soil.

The current thinking is that when it rains the surface of the soil is wet enough for the worms to crawl along without hydrating, and crawling on the surface is much faster than tunneling through soil. So rain provides a super quick highway for worms to travel from one place to another. But if they end up on a paved driveway or sidewalk when the sun comes out, they tend to dry up and die.

Vermicomposting is the process of using worms to degrade manure and kitchen scraps and it is claimed to create compost. When the material exists the worms it is not yet compost but you can call it a pre-compost. The material has been ground vey finely, the composting process has started and it is full of microbes ready to continue the process. But it won’t be finished compost for several months. More on this in Vermicompost – Is It Really That Great?.

Should You Add Worms To A Compost Pile?

I hear a lot of talk about adding worms to a compost pile to help with the composting process. They might help in a cold compost pile, but the worms can’t take the heat of a hot compost pile. As the pile heats up, they leave until the pile cools down again, at which time they may return. Even if you don’t add them, the natural worms in the soil will find the finished compost. That is why you see them in the pile when you harvest compost.

Legend has it that giant earthworms exist in North America. “Rarely sighted, the giant Palouse earthworm was said to grow almost three feet long, smell like lilies, and spit at predators. ”

A team of conservationists from the University of Idaho found this mysterious creature in a prairie field a few years ago. This earthworm is native to North America and is very light in color. Contrary to popular stories they don’t smell like lilies nor do they spit at predators. The ones that were found were only 10 inches long. That is nothing compared to the giant Gippsland earthworm, Megascolides australis, from Australia that can reach 10 feet in length. How do you get that on a hook? 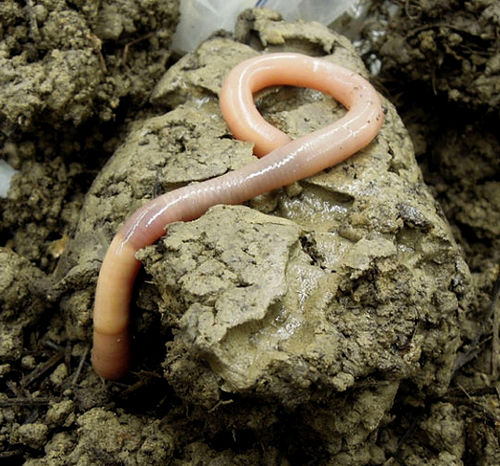 The sikusi is a mythical ice-worm that is able to melt an igloo. These may just be stories but there is a real ice-worm called Mesenchytraeus solifugus. that lives in ice in the pacific Northwest and similar worms have been reported in Greenland and Russia. It can tolerate temperatures between 7 C and -7 C (44 F and 20 F). Above that is too warm and below that they freeze. Not much is known about them but they probably live off the algae growing on ice.

If you know of any other earthworm myths, let me know below.